What is 5S? The 5s Philosophy:

One of the most powerful Lean Manufacturing Tools and a cornerstone of any successful implementation is that of 5S, but what is 5S and its 5 Steps of Seiri, Seiton, Seiso, Seiketsu and Shitsuke? 5S Work Process 5S is a simple tool for organizing your workplace in a clean, efficient and safe manner to enhance your productivity, visual management and to ensure the introduction of standardized working. Most of the other definitions of 5S and descriptions that I see here on the internet concentrate heavily on the aesthetics and the efficiency gains that you achieve through implementing 5S and neglect the real aim of 5S; the need to introduce standard operational practices to ensure efficient, repeatable, safe ways of working. In addition to standardised working which provides you with a stable foundation to build all of your other improvements through implementing Lean Tools, you also provide a highly visual workplace. One of the most important factors of 5S is that it makes problems immediately obvious. 5S is a team run process and should be conducted by the people who work within the area in which the principles of 5S are being applied, it is not a tool that can be applied by an outsider onto an area without the knowledge and cooperation of the people within it. 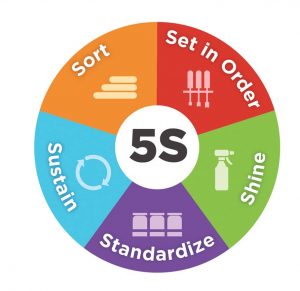 5S as a methodology has come out of the techniques within Total Productive Maintenance (TPM) and from the Toyota Production System (TPS). However many of the individual components such as creating ergonomic and efficient work places can be seen to owe their roots to people such as Taylor for his work on “scientific management” and Frank Gilbreth’s “time and motion studies.” Frank Gilbreth showed that by improving the ergonomics of a bricklayers working methods he could reduce the number of individual movements required and increase the hourly output from 120 to 350 bricks laid each hour.

The Concept of 5S

5S is a methodical way to organize your workplace and your working practices as well as being an overall philosophy and way of working. It is split into 5 phases, each named after a different Japanese term beginning with the letter “S”; (Seiri, Seiton, Seiso, Seiketsu, Shitsuke) hence the name 5S.

These are the five distinct phases of 5S:

And for completeness, some companies add a 6th (6S) of Safety, although in my opinion this should be an integral part of the steps of 5S and not a separate stage in itself.

There has been reluctance for some companies in the past to take up “Japanese” initiatives for business improvement, so some consultancies and other bodies have come up with non-Japanese equivalents; two of which are listed below as alternatives for 5S.